How to kill a tatu 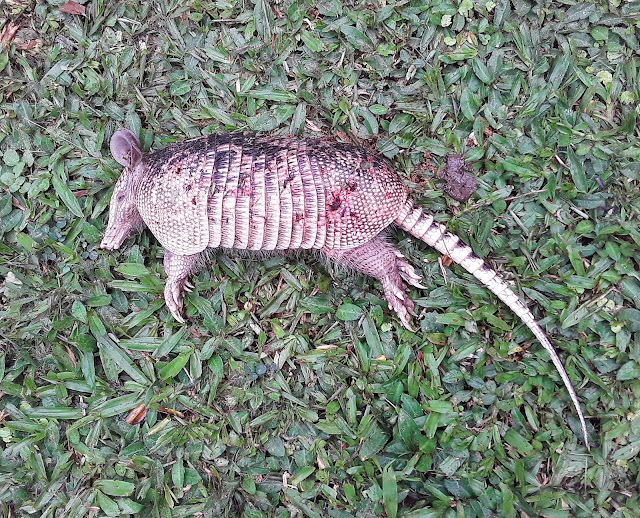 I see it standing on the cement platform surrounding the house. Its a a tatu. In the grass. On its side. An armadillo. A dead tatu. A dead armadillo on the side lawn.

An armadillo like the mockingbird is an animal you are happy to have around your garden. The mockingbird to fill the garden with beautiful bird song and the tatu to  having fewer insects, spiders, ants and snakes around your house can be some of the perks of letting the
tatu live its night life letting it be part of the  natural ecosystem.
Further more I think this nocturnal creature is so jurassic diva cute.

T a t u (Brasilian Portuguese)

Any of various omnivorous burrowing mammals of the family Dasypodidae, native to southern North America andCentral and South America and characterized by an armorlike covering consisting of jointed bony plates.
[Spanish, diminutive of armado, armored, past participle of armar, to arm, from Latin armāre, from arma, arms;

Why is it dead?

Apparent is that this armadillo met with one or more dogs that killed it.
The mark of the teeth of the dog that killed it is evident.  Why did this or these dogs kill this tatu?

Clear is that in the past Tatu was hunted to be eaten. This Marcello thought was someting that happened in the past. Not anymore but..

The dogs that came running in the night and landed on our lawn and at the back of the Virkkilä home (where we are staying)  at several times during the past two evenings long after the velvet darkness had fallen over Penedo shows that unlawful hunting on others private proverty is apparently a deadly activity that is still being excersized.

The two Pointer type of dogs that out of breath landed in the Virkkilä garden that sits on the more or less 90 degree angle start of the  mountain right behind the house where the   typical hunter type of dogs with marked leather collars and with a clear purpose of hunting were at work.

Now we know that it was not only birds they were hunting, but also tatu. This armadillo got away and escaped to the side lawn where we found it.

With the burial of the tatu in the garden that followed I let go of my over romantic view of Brasil. Until today I have wanted to see only the tropical paradise. With the death of the tatu on the lawn it was like a wake up call.

My telephone was stolen a week ago in Ipanema. We knew that the beach of Ipanema specifically and Rio de Janeiro in general is a picpocket Eldorado so we kept our phones, wallet and money in a what we thought a safe hidden place at all times...

Since my phone still was stolen, I guess not such a safe place...

The thing is that you can not stop thinking of how and when your phone was stolen since we never left our spot and as a safety precaution always went to swim one and one so that someone would always stay with our valuables.

As we leave Rio I try to get a new telephone sent from 3 First in Sweden,  but we come to the conclusion after some research that phones like my iPhone XS seldom reach the correct destination even with company sent international mail services.

So that means no phone communication, no Mobile Bank ID, no camera,  no VSCO photo app, No direct Blogger app and so on...There are so many activities that my phone helps me with that I do not think of anymore. Like telling the time. I do not wear a clock on my arm at all times because I have my phone.

Sadly the poverty in Brasil at Level 1 still exists (see all 4 levels in the book Factfulness by Rosling) although rich in everything that counts high as country treasures the racial problems and social injustice in Brasil is so overwhelming that comparing it to United states in the 30´s and Harper Lee's How to kill a mocking bird ( -Right now playing at the Shubert Theatre on Broadway, NYC, NY ) that was published 1960 seems sadly adequate.


Sorry for not posting on Instagram and blog as much as normally. Since my phone was stolen and we have two more weeks (almost) before we are back in Stockholm I will not photograph and will report much less and use my time just experiencing. I will blog about it and also fill my Instagram and FB pages I promise. But right now I will read more in Factufullness by Rosling after my workday in front of the computer and then just take part of life here in the mountains between Rio and  São Paulo at the Jordans.


Above you hear the remarkable cover of the song Forever young by Liniker. The numbers of murders of trans gender people in Brasil are  so high on a everyday basis that if it was straight caucasian men being killed we would have had a media war of information. As it is now, no-one knows. See&hear the video above I beg you. Sadly we now know how to kill a tatu.

Brasil is anything but equal.