When my friend Hans Fabian dropped me off at Uppsala Central Station and led me to the bus that would take me to Arlanda for my flight on Sunday around midday,
I really felt nervous.
The sunny spring day rushed by outside the window of the bus on route to the airport outside Stockholm.


All I could think was :

Do I have the correct documentation of my lawfully weded husband presented in the correct way for the Federal Police on the border of Brazil. Will our Personbevis (Swedish : Person Bevis) be enough. Person Bevis is the document needed in Sweden that is sent after your "order of a withdrawal from the Personal register" of SKV aka the Swedish tax office.


What I learnt at the Lufhansa counter was
that I should have been prepared much earlier than ever expected.

When I checked in, or more like when I handed over my passport,  when the welcoming Swedish speaking woman at the Lufhansa/SAS counter says;


I can not confirm your flight.


Brazil have travelling restrictions for all countries of Europe that have confirmed spread of the Covid19 virus named Corona.
Sweden is one of the countries on the Lufthansa list which has a link to the Brazillian Government stating the same in Portuguese I assume…

she continues:
I can not check you in to my system so I have to call my manager to continue.
I so lost it right there,
but decided that OK,
what more can I loose so I say :
May I just present my conclusive documents proving that I am married to a Brazilian. It will not take that long. Then you can call your manager.

So I show her the Swedish original document with our correct marital status and both Marcellos and my name and numbers are shown.
Now, preparing for this intercontinental pandemic tour. (Against all odds?) we want to be totally prepaired so I talk to my friendly contact at the UD The Swedish Foreign Ministry that said that checking with both the Swedish Embassy representation in Brazil but also the Brazilian Embassy representation in Stockholm.


The Brazilian Embasssy in Stockholm let Marcello know through an email answer to his request : what documents are recognized by the Federal Police when entering in to Brazil as a Swede married in Sweden to a Brazilian. The answer was : a Hague Apostill seal on your Swedish document performed by a Notarius Publicus. Said and done. I got the H.A. to the cost of 500 SEK.
Now, gay marriages are protected by law in Brazil, but as it says at the UD site about Brazil is that corruption is a big problem as well as HBTQ related matters.
The sitting government in Brazil is not putting gay matters on their priority list... so to speak. So therefore my worry.
Getting back on track to me at the Lufthansa counter when I turn the page of our Swedish Marriage license on the flip side you see the Hague Apostill. I got this stamp with room for writing on the back of the document where a lawyer acting as a Notarius Publicus has signed. Yes, we are talking pen signature and stamp on paper.
The Hague Convention of 5th Oct 1961 considered this stamp protocol, and so did when asked the Brazilian Embassy, state as what I as a Swedish man specifically NEED,  concerning documents  for entering into Brazil during the Covid19 pandemic.
So here I am with my stamp at the Lufthansa counter at Arlanda. She does not seem to know what a Hague Apostill is… Neither did I 24 hours ago. So I continue to show the english version of our marriage status that I spent more that 3 hours outside in line to get on friday.
Here come the surprise element. Our surprise element becauce I would have never known that this would be what helped us the most : Marcellos close friend and lawyer Ludmila Poirier living in Figueira da Foz,Portugal where she attended the Coimbra University.
Poirier produced a four pages statement verifying our right to be united and our documents to be correct.
This four page powerful document I explain to the Lufhansa  lady(more young woman) just before she takes off and says : wait I will get my mangager.

The Lufthansa Lady(woman...!)comes back with her manager. The Manager is female, 50+, short haircut and gets right to the point.

What is your reason to travel in to Brazil at this time of restrictions ?

Me - I am married to a Brazilian and have the documents to prove it.
So here we go showing the chosen documents again.Now for the manager.

She looks at me after I am done and says.
Off course you should go to your husband.
Have a good trip and stay safe Mr Schönning.

At least to Frankfurt...


Frankfurt International Airport where I have landed so many times for the different furniture fairs empty . The enormous glass building is almost empty. There are more personal that travelers.
I see two people in front of me. 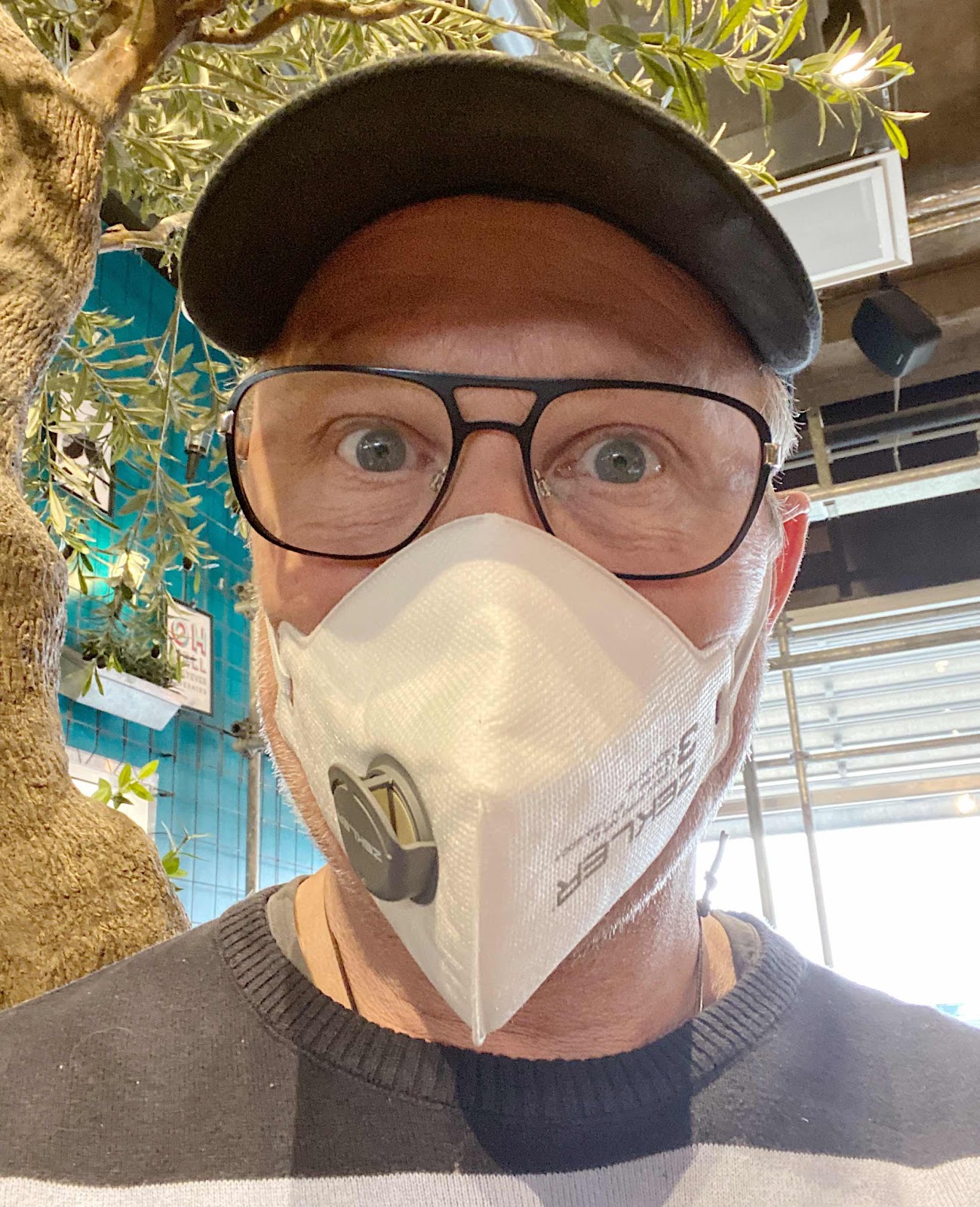 The first time ever flying with a face mask.

Coming to Arlanda to stand in the non existing line for customs  ....we are three that slowly pass through.

At Frankfurt Airport where normally it ALWAYS
is packed with people it was even more strange.


As I land at Frankfurt International Airport a couple of hours later I disembark and start walking to my gate that I found already at the Departure monitor.

No people are traveling. Its empty everywhere.Of the shops and restaurants I estimate at least 50% are open. I will wait for almost for hours when my flight for Sao Paulo will take off at 20.50. First I find a italian sandwich place and order a warm mozzarella and tomato sandwich to go. Stop to get beer and go to the gate.

Find the gate and sit down to check my messages and to enjoy the warm mozzarella and a cold beer. There were only snacks on the flight from Stockholm.
The hours go and suddenly a couple that come up and speak to a a totally brazilian tattooed guy laying down over tree seats. They say the gate has been moved in Portugês. I wake up from my half slumber and pack myself up and start walking to the monitor. As I just get out it says clearly that the first gate I hit as I get up is the new gate. Gate 95, Sao Paulo/Guarulhos.

Gate 95 is very busy. There are at least 5 correctly dressed Lufhansa personal. They are making announcements continuously. First in German, then in English and lastly in Brazilian Portuguese. Concerning Lufhansa flight LH506 please come to the counter passenger......and they call more than 5 people in all of these 3 languages.


Then all of a sudden they call passenger :

The time of boarding should just have begun and I am called to the counter. No-one is boarding still.

There are four German Lufthansa personal in conversation with four passengers with cotravellers and family and everyone is involved. I walk from my seat where I leave my bag because I see it well from the counter as as well. I make it to the counter and the most terrier type excited Lufhansa lady calls me toward her. She is of asian descent and speaks german with a high pitch voice that cuts through the noise.

I say Hi. I would like to show you my documentation. She says: OK. She asks for my passport.  -You´re Swedish. Are you aware that Brazil has travel restrictions concerning Sweden.
You are not allowed to travel in to Brazil.

I ask if I may show my documents because I am married to a Brazilian and can therefor travel in to Brazil during Covid19  travel restrictions.

As I start reaching for my brown hard envelope to show our documents again, the terrier type Lufhansa Lady starts arguing with the passenger she just helped prior to "helping" me.

I see the smile in the eyes of a good looking, 60+, grey long haired woman carrying pilot glassed with a green tint that seem to be just where she should and does not seem to be irritated in this tense situation like my terrier type of "help".

Out of nowhere I say to the terrier : please take care of the problem with your former passenger and I will talk to :
and I point my hand in the direction of my savior.
At least that is what it feels like.

I make my case again at the long haired woman carrying pilot glasses taking up the documents and explaining why I can travel in to Brasil is due to my marriage to Marcello Jordan who is Brazilian living in Penedo, Rio de Janeiro, Brasil.


She says : I need to see these documents and hear your reasons Sir.

What you should know is that prior to leaving on this trip I really did everything I could to prepare the correct documents. As I communicated with Migration Officer Alexander Forsberg på Embaixada da Suécia in Brasilia who sent a lot of links (that I had already seen) from Sweden Abroad which is the Swedish Foreign Ministrys site for Swedes traveling the world.

The info I needed I already got through the swedenabroadsite and when I told Migration officer Alexander Forsberg of my fears to travel in to Brazil due to the obvious Covid19 + HBTQ situation and having my Swedish marriage license as a gay man being approved by The Federal Police he answered nothing. He answered just like I was asking regarding a bag being sent to the wrong destination.

The long haired handsome Lufthansa Lady looks into my eyes and says. It really  looks like you have prepared to make your case clear. Congratulations to you marriage SIR. If I understood it all correctly you were wed in the end of Februari right?

I´m dumb founded. Suddenly I do not understand...Did she just say its ok? Thank you so much, Danke Sehr!

Thank you for reading. I will finish the last episode and post at the end of the week.