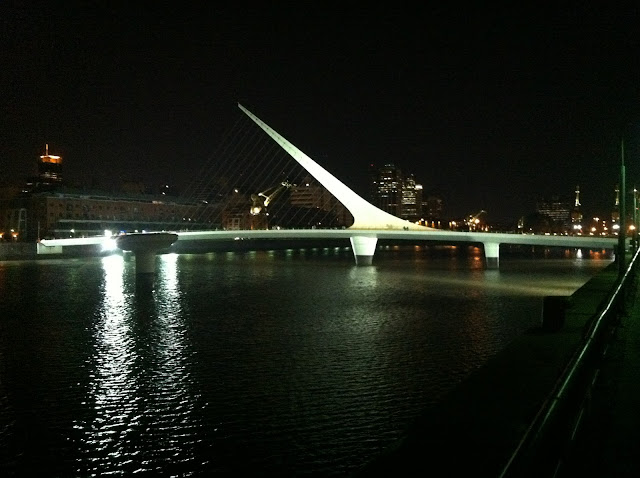 Read more at Wikipedia that says :
The Puente de la Mujer (Spanish for "Woman's Bridge") is a footbridge in the Puerto Madero district of Buenos Aires, Argentina. It has a single mast with cables suspending a portion of the bridge which rotates 90 degrees in order to allow water traffic to pass. When it swings to allow watercraft passage the far end comes to a resting point on a stabilizing pylon.


It was designed by Santiago Calatrava and is similar to his Puente del Alamillo and Sundial Bridge at Turtle Bay. Started in 1998, it was completed on December 20, 2001. 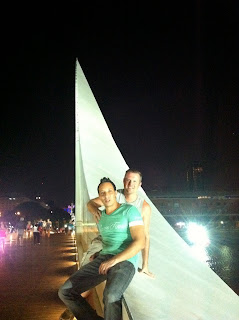 Eduardo and me sitting on the bridge

-Eduardo is picking us up around 10 pm tonight to take us out for a ride in his car to the Porto Madera area (Buenos Aires), says Hamid to me, who due to the heat (it felt like +40 degrees today) is slouched on the sofa with a cool drink reading.

-I don´t feel like going out again in this heat Hamid, I answer, it´s just to warm outside.

Hamid left but came back with Eduoardo to convince me to come. Not wanting to disappoint my friends, I put my shoes on and got into the car.

Eduardo who is a veterinarian came late due to a dog that had such bad reaction to the heat he feared for his life.

-That´s totally how I felt today I gasped. I understand the dog!

There is still a lot of trafic around 10.30-ish pm but no major obsticles. Eduardo takes us down the Avenida 9 of Julio with it´s 9 lanes  and pass the Obelisco and we later arrive at Porto Madero district.

We see the Calatrava bridge from a far and I instantly like it. It has such slim beautiful lines. Like a white arrow shot acros the river.

Sitting down to have a cold beer by the Rio De la Plata river overlooking the bridge Eduardo explains.

-The same year the bridge was finished one day he was going to pay for his ticket to Costa Rica. At the bank he could not take money out.

It was the day of The Corralito, which is the informal name for the economic measures taken in Argentina at the end of 2001.

Eduoardo explains to me who look chocked that he like so many more never got all their own saved money back. The money in the bank saved to help his family and himself. Now over 10 years later he as well as Argentina is back up on his feet.

Off course I knew about this and I read and saw the news, but meeting Eduardo who was there and experienced it for real is another thing completely.

What if it was me, my family and country this happened to?

Riding back in the car through the beauty of Buenos Aires in the warm night with the aircon on we sit silent. We thank Eduardo when he drops us off in Palermo on Nicaragua where we rent our apartment. Glad Hamid and Eduardo "forced" me out this evening and thankful that I learned, again, not to take anything for granted.

PS. Calatrava is also the man behind Turning Torso in Malmö.DS 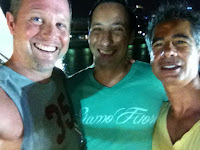 The bridge gang :) Me, Eduardo&Hamid

Calatrava is said to have listened to tango music while designing the bridge and to have intended it to be an abstraction of a couple dancing. The name of the bridge also refers to the naming pattern of the district of Puerto Madero, where all the streets are named for important women -- the only major city in the world with such a neighborhood. A sign between docks 2 and 3 gives biographies of the women. People that want to rent apartments in buenos aires  near the bridge need to know that the area is exclusive and very luxurious!