When you read below you might think that, Jimmy knows a lot about Coimbra...but you know...I had no clue.
Not about the Harry Potter connection either...

Had it not been for our outstanding hostess Ludimila Poirier, Marcello and I had not seen Coimbra on this trip on our way to Rio via Lissabon with TAP.

Coimbra is nowadays considered the third most important city in Portugal. From 1139-1260 Coimbra was the capitol of Portugal and the key position in history is found evidens of in the extensive roman ruins found in the archeologic finds here buried under the city.

In Roman times the name for Coimbra was Aeminium and the city developed into an important cultural center, much due to the University of Coimbra.

Walking down the stairs from
the University to the Cathedral.

Video above from the University of Coimbra.

All super fans of the Harry Potter series probably know that J.K Rowling´s was inspired by the University of Coimbra and lived here with her husband in Portugal.

It´s easy to see the resemblance to Harry Potter´s Hogwarts at the University of Coimbra established in 1290.

This is one of the oldest educational faculties in the world and has some the most unique traditional practices still intact.
For example, you can step on (or more kick)  to the University of Coimbra seal to gain wisdom. 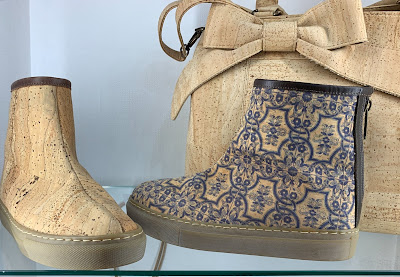 Cork is both grown and made into so many different kinds of products in this region. These shoes and bag are made from cork.

The Mondego river  is the largest river in Portugal. It orginates from Serra da Estrela at 1525 meters, goes through Coimbra and down to the Queen of Beaches, Figueira da Foz (see previous post) where it hits the Atlantic.

I will come back to this part of Portugal for sure. That I can promise. A comeback of this fantastic city is due. Thank you Ludimila!

Really nice and informative blog, keep it up buddy…