"One might even think it is ugly, and I say :
MASP is not beautiful,
it was never beautiful.
I did not seek beauty, I sought freedom.
The intellectuals did not like it,
the people liked it. They liked it a lot.
You know who did that? It was a woman"

I´VE BEEN MASPED. I TRIED MASPIFIED FIRST BUT IT DID NOT ROLL OF MY TOUNGUE EXACTLY. MASPed meaning,
I have visited and seen the museum
and the exhibit that had the longest line out under the belly of
MASP was :

Tarsila Do Amaral : Canabalizing Modernism (will come back to this exhibit later here on the blog)

On the bottom of my post you
find what I came for:

Lina Bo Bardi : Habitat
Lina has a deeply intimate relationship with MASP
she is the author of this building, inaugurated in 1968,
and conceived exhibitions at the former headquarters of the museum on 7de Abril street from the time of its foundation in 1947 in São Paulo, Brazil. 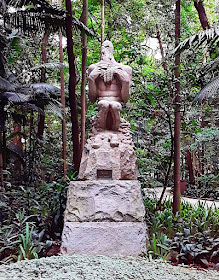 Brecheret the sculptor (to whom I have not been introduced to prior to this stroll in the park) has created in Parq Trianon you see in the photo above which was part of the magnificent castle of a building that Joaqin Eugenio de Lima owned and when he donated his property to the municipality (which is a story of its own...) with the promise that his view should never be altered which is the reason
WHY Lina Bo Bardi choose a suspended building for it to preserve the view of
the previous owner.
(Don't be to surprised if there are more than 1 explanation. This is Brasil)

Many wanted to build where MASP was planned and other museums were also interested in this prominent city center position at Avenida Paulista in Sao Paulo 1968. 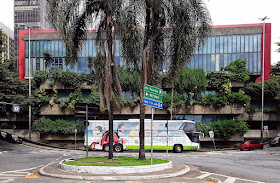 Interesting is that MASP now so
connected to its red color was meant
to be yellow first. In a later stage
changed to the red columns that
hold the structure of ground
is part of the exhibit on
Lina Bo Bardi  at MASP at the moment.

The view of MASP that I love.
The garden balconies placement and impact is impressive. 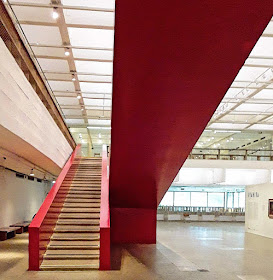 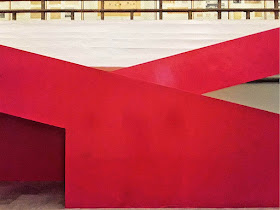 IF YOU ARE A CONSTRUCTIVIST THEN YOU SEE THAT
THE BASE OF THE STRUCTURE HOLDS
THE ENTIRE PIECE OF LONG NECKED STAIRCASE
TO THE EXTENT THAT IF YOU STAND AT THE HIGHEST POINT
AND JUMP UP&DOWN AND
WEIGH AROUND 80 KG,
LIKE ME THEN THE
CEMENT STRUCTURE MOVES
LIKE A SPRING BOARD.

LINA BO BARDI
December 5 1914- March 20 1992
was an italian-born B
razilian modernist architect.
She deovoted her working
life as a designer
and architect spent
in Brazil promoting the social
and cultural potential
in architecture and design. 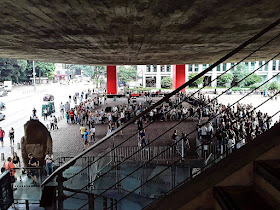 The underbelly of MASP is huge and used as a
market square with artisanal products sold in the weekends
and lots of performances of all kinds take place here.
First here below is me sitting
in the Giraffe chair
(found all over at the museum)
by Lina Bo Bardi ,
but all chairs below are hers : 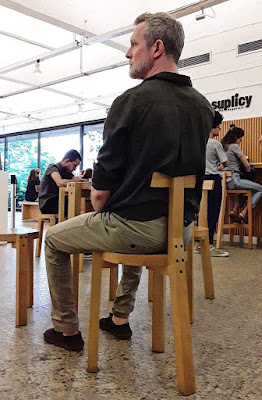 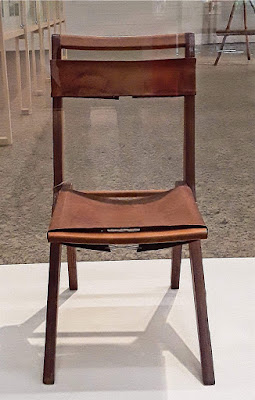 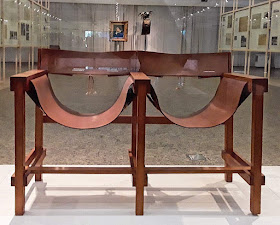 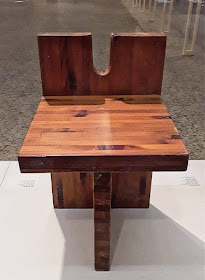 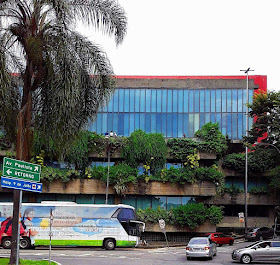 Lina Bo Bardi has become a favorite
designer and architect
after learning more
about her here at MASP.


Please ask me if you have any questions.
There is so much to say about MASP
and Lina Bo Bardi that i needed to
edit down so much to not write a book
about it.
Below you see Masp from above.
At last I want to loudly applaude MASP
for being bilingual and providing a
good translated english text so that
not only Brazilian
is used as i most other
museums in Sao Paulo. 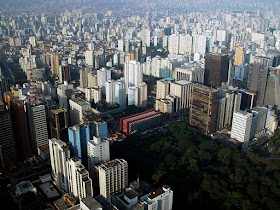 Sensational SP with the
jewel in the crown MASP